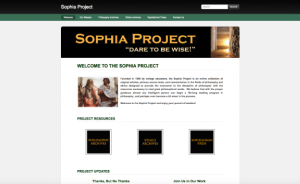 The Sophia Project was launched in 1999 by a group of college-level instructors who hoped to “build the world’s largest online repository for free educational resources in the fields of philosophy and ethics for the sole purpose of expanding the domain of human wisdom.” Almost two decades later, the Sophia Project has expanded to include a publishing branch (SophiaOmni Press, launched in 2009) and continues to offer a number of texts related to philosophy and ethics for free on this website. Here, visitors are invited to browse both primary sources related to the disciplines of philosophy and ethics and helpful encyclopedia-style summaries of key authors and texts. In the Philosophy Archives section, readers can browse texts by categories such as Classical Philosophy, 19th – 20th Century Philosophy, and Eastern Philosophy. For philosophy instructors and students alike, the Sophia Project offers a helpful one-stop-shop for resources, including key works by Aristotle, John Stuart Mill, Karl Marx, and much more. This will be added to Education and Academic Resources Subject Tracer™. Copyright © 2017 Internet Scout Research Group – http://scout.wisc.edu